Black ink dusts my fingers after forty. Digs under my nails after fifty five-by-seven sheets are cut to size. Each one on top of the pile is tilted a bit differently. There’s more of a black edge on that one before the last. A crooked corner on this one, unnoticeable without comparing it to the straight one next door. The lines are imperfect, like irregular swirls on the fingertips I take to the sink. Fifty done, fifty more to go.  Soap suds rush down the drain in gray trails with diluted ink.

The invitations need to be cut here, on the coffee table at the apartment, because I forgot them on the train this afternoon. This may be better. Cheaper. I like how the rustic imperfection matches the Western rough edges of everything else so far. Halfway done and things are starting to show personality.

The envelopes came out of the box in a perfect pile without a mark. Now the corners are jagged, the pile is puffy with air, the return addresses bleed burgundy, acid-free markings. Penmanship instead of smooth calligraphy. The beginning shows small tight writing, the hand of my husband-to-be. At the end, he had to leave for work; the letters grew large, the spaces between lines, thick, but the information, the same.

Your invitation will be yours, the only one like it. And we made it just for you. Sat and sweat at this coffee table, in our apartment-to-be, the Dennisons-to-be, because we want you to be here with us. Some of you won’t, but it won’t be because we didn’t ask.

I want so deeply to be a lover, not just a collection of holy words in sandals or sneakers. I want to be real to people of all kinds. I want to change the way people receive the word “Christian” because of having known me. Positively.

I want to speak without arrogance and learn new things with passion, without agenda.  I hope to share boldly about belief and the few things I know, but keep quiet more often and hear all the things I’ve never heard.  Can I learn to ask questions with grace and sincerity, seeking to explore the layers beneath the person we are usually comfortable knowing?  This is love.

I find myself regularly agreeing with my friend and peer, Andy Marin, and his thoughts on what love–at its core–actually is. What is this love that God gives to us and expects to see holding us together, the lines between people? Take the time to read Andy’s thought here.

When you went through the grocery store today,
your mind was stuck on your dad.
When he was around, alive, yours.
Before he died
when you were small.
Before it was just you and mom,
two sisters, that’s all. All women,
no dad. Smiles, but sometimes nothing but sad.

In the freezer aisle, long glass doors, sealing sounds as they close and keep in the cold, you swing your basket, half full, not heavy. Near the frozen treats, you tap the toe of your shoe and scan the flavors. Don’t usually keep ice cream in the house where there’s only you. Mint chocolate chip, moose tracks, cherries jubilee, you see a label shouting fat free. Vanilla, French vanilla, vanilla bean, something else vanilla-y but not quite so vanilla-ish. The labels are giving you a headache. Maybe popsicles, you consider. But before you move on, your eyes fall on butter pecan—dad’s favorite flavor. A pint of the creamy flavor falls into your basket, halved shells of soft nuts, cold from fossilizing in the ice cream, buried deep like treasure.

It becomes a butter pecan week.
For Dad.

Bob Dylan’s brilliant lyrics, Adele’s beautiful voice.  Make You Feel My Love.  He may have had a point, Dylan, when he suggested that there were things we had to actually step out and do in order to express this thing we feel and choose.  This…love.

Sean McConnell, lyrics and vocals, taking the narrative stance of a creator God. Madly In Love With You.  God plainly does things to show His love.  In a grossly simplified gospel, He sent His son to earth to live among his created people in order to show how He loves us, to show how to love others, to show what love actually looks like, what it needs to do in order to be made real, tangible.

If making you feel my love doesn’t matter, if your perception of feeling legitimate and valued isn’t important–then I signed up for the wrong gospel.  Jesus made a ministry out of making sure others felt loved by him.  Where would I get the idea that anything else is okay?

I had a camper once, a little girl who’d been assigned to my cabin. Her name may have been Rebecca, but I don’t remember. She was nervous when she first came, younger than the other girls, trying hard to make friends. She had little brown bangs that stuck to her forehead when she ran around on the beach, her skin wetting with perspiration. When I took photos of the girls, she put one hand on her hip and opened her mouth in a toothy grin. Such a ham for the camera. One hand in the air or a tennis shoe on a tree stump, eyebrows to the sky. She made me laugh. Always wanted to hold my hand.

My cabin was full of eight and nine year olds, but maybe-Rebecca, she was only seven. Once, on the volleyball court the girls were supposed to be ready to head down to the beach after catching and throwing the ball over the net. They, too small to play volleyball by standard procedure, kicked up sand and squinted into the sun during their version of the game.

Maybe-Rebecca held my hand and wanted to go back to the cabin before beach time. I didn’t quite have the time. The beach was open on my clock, being the waterfront director, as I was. Couldn’t the potty wait? She pleaded with almond eyes and I hurried back to the cabin with her to visit the bathroom.

My waiting outside the bathroom became lengthy. Everything was not alright in there. I could hear her sniffling. At age seven, it was sometimes alright to offer help in the bathroom in such scenarios. In maybe-Rebecca’s case, her sniffles were due to a not-so-standard bathroom accident. It’s the number you’re thinking it must not be and it was sitting comfortably in the recess of her swimsuit, down now around her trembling ankles.

She knew her friends were swimming and she was terribly afraid of being left out. This was her only suit and to go down to the beach without it would be to tell the entire camp that she was only seven.  That she couldn’t stay away at camp like a grown-up junior camper. Her little heart was breaking to pieces on the bathroom floor. And so while she stood nude, wrapped in a towel I immediately-after washed, I hand-washed her soiled suit in the sink with a mild detergent and dried it with my blow-drier. I was repulsed by my hands sharing sink with the details of the situation, but didn’t let on. I dried her tears with clean hands, because she was going to be just fine, slipped her right back into her salvaged swimsuit, pulled a fresh towel off the hook and walked down to the water holding her hand tightly. No one knew. No one ever had to know.

Sit by me and say nothing. Just whiten this noise. Deafen these railroad tracks metal sparking on metal these sun-kissed shrieking children these shrouded mothers sleeved modestly to their wrists edged in sweat these fathers with strollers like cargo these coolers these suitcases. Punches and chads, dollars and change. Crackling speakers with nothing but stale terrorist caution to say. Sit near me so I’ll hear only you while we see the world move.

I met him in a bar. Neither of us were there looking for phone numbers. I wasn’t just one young lady with a cocktail, in a bar where he was buying drinks for women until he took one home. That kind of beginning isn’t our kind of beginning. Still, he wasn’t mine for a long time. 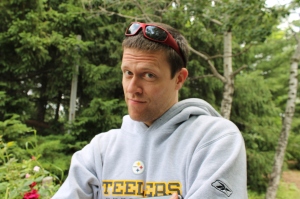 I met him in a bar. He was the bartender. I, the waitress. He thought me too loud, dare I say obnoxious. I thought him haughty, conceited even. But then I caught a better glimpse. A striking young man tossing limes in the air, spinning while they slide onto the lip of the glass in his hand. He laughs with his whole body, his smile stays on his face a while after what was funny. When he speaks to customers, he crouches down at the table or leans comfortably over the bar rail; it makes everyone feel like they’ve known him for years. Like he’s charming and he loves them more than as a customer. He says he gets it from his dad.

And not only that from dad.  His middle name, too, which I took to using frequently, months into our slow-paced, casual courtship years ago. His full name is not Bradley, as I once imagined or expected it to be, but just Brad. Brad Alan, like on the disc covers I printed for him once, before studio days, and like he uses on posters for his solo shows in New York City.

When I wasn’t sure how to proceed, I learned most about how he would treat me, the way he was falling in love with me so tenderly. Bursting at every seam, cheeks aching from laughter, we filled sunrise to sunset with adventure and jokes, exploring our Midwestern city creatively. I pretended we were only friends, pretended no one knew I’d fallen for him. He never stepped where I didn’t let him go.

We didn’t make every decision with perfect precision. I could’ve drawn some of our lines with invisible pen, I reckon. But the history of us is something I’ve come to love. For years, I’ve been adventuring and exploring with this cowboy. We’ve dreamed so many dreams together. For years, figuring what makes him tick, dissecting the world together, asking questions, loving the mystery of life.  Only the very beginning of these next forty years.